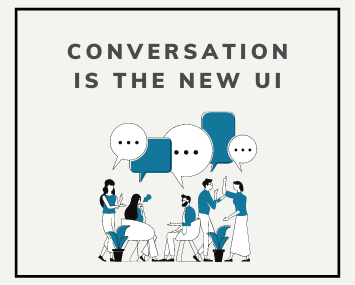 Over the last decade, users of technology have experienced the benefits of an ever-expanding developer toolkit dedicated to enhancing the interfaces that we use to communicate with our devices and applications. Over the last decade, the typical user interface (UI) has moved well beyond the constraints of the keyboard and mouse or trackpad toward an increasing reliance on touch and voice. In the 2020s, I would like to re-frame an evolving idea: the new frontiers of UI will increasingly leverage modes of artificial intelligence—specifically conversations—to power interactions between human and machine.